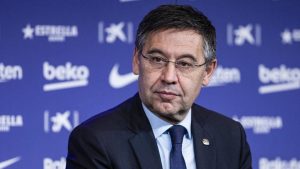 Barcelona Presidential candidate, Victor Font has called on the current president of the club, Bartomeu to resign immediately.

This is coming after the club captain, Lionel Messi informed the La Liga giant of his plan to leave the club..

Bartomeu had promised fans that Messi would be at the Camp Nou next season, following the 8-2 defeat to Bayern Munich in the Champions League quarter-final.

The Argentine has, however, indicated that he wants to terminate his contract with the Spanish side.

Font has now asked Bartomeu to step down and called for elections to be held immediately.

“Bartomeu, resign now! You’ve been unable to manage the best footballer ever, a legend made here. Hence why we repeat: Bartoméu resign and elections as soon as possible,” Font said.